8.6
Very Good
Our verdict: Atlas VPN quite possibly has the best offer when it comes to free VPN service with its unlimited bandwidth and strong security protocols. Not surprisingly, the experience gets even better when you subscribe to their premium service.
Get Atlas VPN - Protect your privacy!
Get unrestricted access to video and site content from anywhere. Download torrents and P2P anonymously. Get the best deal via our link...
www.atlasvpn.com/special-offer 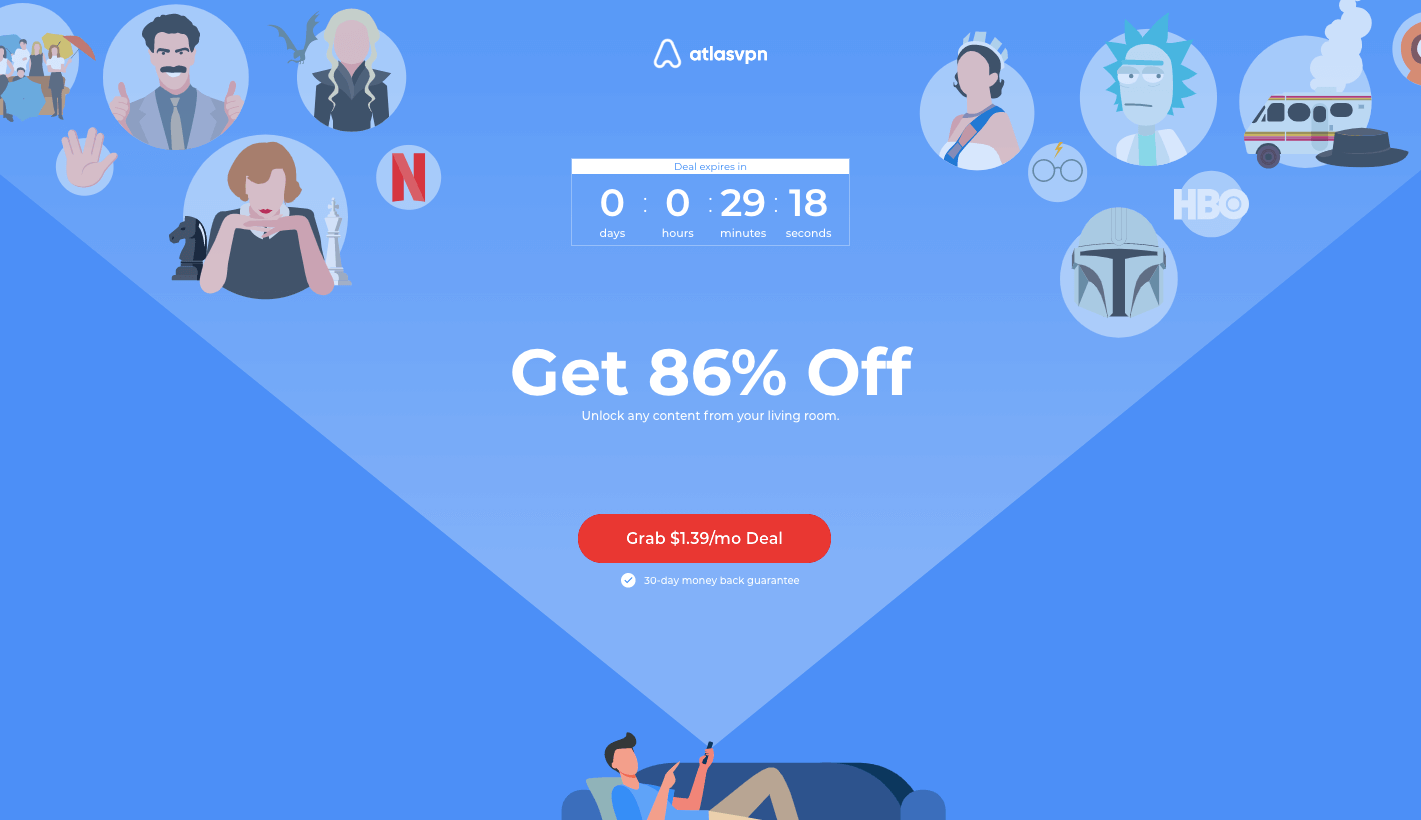 Atlas VPN was launched only in January of 2020 but it’s already kickin’ up a storm among many VPN users. It’s advertised as a free VPN service that values your privacy, does not bombard you with ads, does not have a data cap, and uses military-grade encryption. In short, it’s everything that most other “free” VPN brands are not which is honestly very refreshing. Of course, if you want access to optimized and faster servers, Atlas VPN also offers a Premium version.

This VPN provider is also gearing up real fast with over 570 servers spread across 17 countries in just a year of operation. Connections are fast, reliable, and safe with an IPv6 protocol, and protection against DNS and WebRTC leaks. The apps work with popular streaming services and are compatible with Windows, macOS, Android, iOS, and soon, Chrome.

What we like further about this service is that they collect a very minimal amount of data. In fact, if you’re using the free version, you don’t even need to register! Sounds good so far but let’s find out if this service is, indeed, as great as it claims to be.

Atlas VPN runs on an industry-standard combination of AES-256 and IPSec/IKEv2 to secure its web traffic. This makes it practically unbreakable so you won’t have to worry about hackers getting their hands on your information. What about the Atlas VPN itself, how much of your data is being stored? According to their Privacy Policy:

“We are no-logs VPN: we do not collect your real IP address and we do not store any information that identifies what you browse, view, or do online via that VPN connection. The only information collected is basic analytics, to ensure great service to all our users. This also means that we do not have any data to share with law enforcement and government agencies who make requests for information about what you were doing through a VPN connection.”

Well, that is very comforting especially since Atlas VPN is under the “5 Eyes” agreement. With this data logging policy, they won’t have any data to hand over to governments or law enforcement. In addition, Atlas VPN also features a Kill Switch to protect you against data leaks in case connection drops. Another handy feature is the “SafeBrowse” which warns you when you are about to open a malicious or potentially harmful website. As of this writing, however, both the Kill Switch and SafeBrowse features are only available on Android and iOS apps.

Fans of streaming and torrenting will be happy to know that Atlas VPN does not impose any bandwidth limitations. It also works with popular streaming platforms like Netflix, HBO, YouTube, Disney+, Prime, and BBC iPlayer. Admittedly, our experience streaming a movie on Netflix was a bit disappointing. The movie didn’t load at all and it wasn’t until we switched to the paid version that it finally started running. We were told that servers are optimized for Netflix whether you’re on a free or paid version but we find our experience on the former kinda hit or miss. It might depend on the server though so if you don’t mind switching around to find one that works faster, I guess the free service would suffice cuz once you got it running, you can enjoy 4K video quality with NO data cap!

As far as torrenting is concerned, P2P traffic is also permitted across all servers. We had the same experience of slow download speed though but it picked up right after we switched back to the Premium version. Averaging 800 kB/s, we were able to download reasonably large files in no time at all This is fast considering our internet connection speed at the time of this review.

In order to test Atlas VPN’s speed and reliability, we used it over a course of several weeks not only for streaming and downloading but also for online gaming and normal browsing. Before connecting to a server, we usually have an average download speed of 49 Mbps and an upload speed of 7 Mbps. There was hardly any difference when we connected to a local server as our download speed remained stable, averaging at 41 Mbps and the upload speed hovered around 4 Mbps. Not surprisingly, the speeds dipped a little as soon as we switched to a server in the US (we were somewhere in Europe at the time of this review). From 49 Mbps base download speed, it dropped to around 37 Mbps while the upload speed decreased to 3 Mbps. Overall, our experience had been more than satisfactory. Streaming went well with hardly any lagging or buffering, regardless of the platform. Take note, however, that the speed tests were done on a Premium account.

Atlas VPN has a comprehensive FAQ section under the HELP tab. The articles aren’t well organized although we found the Search bar helpful in finding what we need. If that fails, you can always send them an email at support@atlasvpn.com. If you’re a Premium subscriber, just log in and you’ll have access to personalized 24/7 customer support.

For context, let us first discuss the differences between the free and paid subscription. The free version basically gives you unlimited bandwidth, data encryption, and encapsulation, as well as limited access to only 3 locations: The USA, Japan, and Australia. On the other hand, here’s what you can get from a premium subscription:

4.8 out of 5
Claim Deal
www.privateinternetaccess.com
Top10VPN