-
Offer Not Available
Our verdict: Although Norton Secure VPN is not fully featured like other Virtual Private Network (VPN) products, it is a good choice for users with less-demanding VPN needs. It provides good value to single device users and is compatible with the award-winning Norton Security Suite.
Get Private Internet Access - Protect your privacy!
Unlimited access to servers from all around the world. Super fast speed. Get the best deal via our link...
www.privateinternetaccess.com/special-offer 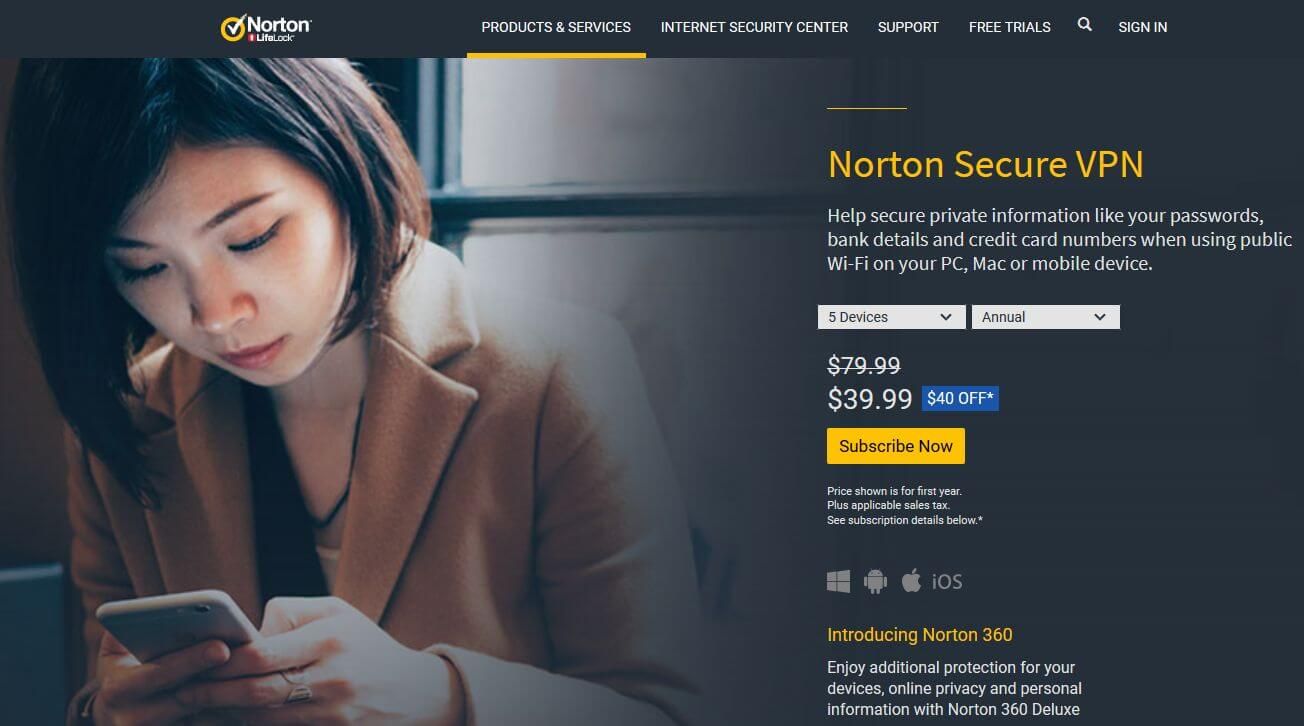 Norton (also known as Norton by Symantec), is a division of the American software company Symantec Corporation. Norton’s parent company, Symantec is a leading digital security solutions provider and is enlisted in the Fortune 500 list. Since being acquired by Symantec in 1990, Norton has developed a range of products and services related to software security.

Norton Secure VPN is a subsidiary service of the acclaimed brand – Norton by Symantec. Time and time again, the digital security company has proved its mettle on the global stage:

Most public Wi-Fi connections are not secure and offer little protection against malicious users. A VPN gives its users online privacy and anonymity. It is an essential security layer to protect your private data and avert hackers from eavesdropping on your network traffic. It achieves this by encrypting your data and rendering your connection through a secure and anonymous server.

It’s important for VPNs to have a diverse distribution of servers across the world. Norton Secure VPN has a fairly impressive network of 73 server locations spanning 29 countries. Though the server locations don’t feature countries like China and Russia; the list expands to geographically distributed countries like Australia, Turkey, South Africa, Israel, Brazil, Mexico, Japan and countries in Eastern Europe.

Having a secure connection shouldn’t mean that you have to compromise on the speed and reliability of your connection. Norton VPN provides fast service for its consumers and has an express speed for local connections. TechRadar conducted speed tests to measure the VPN’s performance against a 75Mbps connection. Servers in the UK rev up to download speeds of 60-66 Mbps. Servers located in European countries nearby also have fairly fast speeds, ranging between 50-65 Mbps.

On the same connection, a server in the US fared between 45-65Mbps. Though speeds in distant locations like Australia and Mexico (15-25 Mbps & 8-18 Mbps respectively) were fairly low; they are sufficient for most users.

These statistics are for a single connection. The VPN performance varies according to the strength of the connection you’re using.

Norton VPN enables secure web browsing on all devices that have one of the following operating systems:

The Norton VPN works well for users who use standard and official applications in all Windows, Mac, iOS and Android operating systems. On other platforms and devices, the VPN has limited compatibility.

The annual cost of a single license is $39.99. Five devices have a greater value costing $39.99 for one year as well. A secure VPN’s ten device license costs $59.99 initially.

The price is relatively cheap compared to other VPNs and what makes it even more attractive is when you bundle the Norton VPN with their antivirus offering. Users can get a sweet deal if they go for the Norton Deluxe 360 bundle which includes their VPN. You can give 5 devices award-winning antivirus protection along with VPN protection for up to a year at just $49.99.